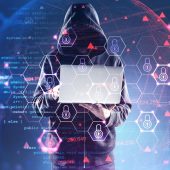 …And What You Need To Do NOW To Protect Yourself

Everybody gets hacked, but not everything makes the evening news. We hear about big companies like Target, Home Depot, Capital One, and Facebook getting hacked. What we rarely hear about are the little guys – the small businesses that make up 99.7% of employers in the United States, according to the Small Business Administration. It’s these guys who are the biggest targets of cybercriminals. Basically, if you run a business, that business is a potential target. It doesn’t matter what industry you’re in, what you sell or how popular you are. Cybercriminals go after everybody. In 2018, a cyber security survey by the Ponemon Institute found that 67% of small and midsize businesses in the US and UK were hit by a cyber-attack. For the cybercriminal, casting a wide net makes the most sense because it gets results. It puts them in a position where they are able to extort money, steal sensitive information and ultimately profit off of destroying the property, prosperity and reputation of others. Why do cybercriminals love to target small businesses? There are a handful of reasons why small businesses make sense to attack.

Just because you haven’t had any major problems for years – or at all – is a bad excuse for not maintaining your computer systems. Threats are growing in number by the day. While many small businesses might think, “I don’t have the time or resources for good security,” that’s not true! You don’t need to hire IT staff to take care of your security needs. You don’t need to spend an arm and a leg securing your network. IT security has come a LONG way in just the last five years alone.

You can now rely on IT security firms like TECHLINQ to handle all the heavy lifting. We can monitor your network 24/7. That’s the great thing about technology today – while many hackers are doing everything they can to use technology against us, you can use it against them too. Tell us your business’s network security needs, and we’ll go to work fighting the good fight against the bad guys.