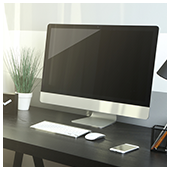 Your employees are some of your business’s best assets. With that in mind, it is imperative that they work with high-performance computers that will unlock their full potential and contribute to your business’s profitability. If only it were that simple. Selecting a computer often involves several factors such as mobility, quality, and price – there are simply too many things to consider. Choosing the right computer requires careful thought, and this is what we’re here to discuss.

Laptops are highly portable, efficient, and inexpensive. If these are the most important qualities your business requires in a computer, then by all means, choose them. Clearly, desktops aren’t built for mobility, but what they lack in portability, they more than make up for in storage, processing capacity, and security. Although laptops make perfect sense for small businesses with great need for portability, they are much more prone to security threats and are not as easy to upgrade and maintain, unlike desktops.

The Central Processing Unit (CPU), determines the speed at which you can access your data and perform business-critical tasks. Speed is measured in Gigahertz (GHz), and a processor that runs from 2 to 4 GHz should be plenty for small enterprises. Arguably the most important item on the list of a computer’s specifications, the processor plays a crucial role in your computer’s speed and efficiency.

As critical hardware components, hard drives indicate how much information you can store and use. Storage capacity typically ranges from 128 gigabytes on “light computers”, all the way up to 2+ terabytes on more critical machines. If your business doesn’t need to store large files such as videos and images, and will be used mostly for email and a few applications, 250- or 500-GB storage should do the job. (If processor speed is number one on your list of computer requirements, it’s followed closely by hard drive storage.)

Operating system (OS) decisions often boil down to choosing between Windows or Mac. It might help in your decision-making to know that Windows remains the most widely used OS mainly due to its high compatibility with business software, not to mention, its relatively cheaper price. Macs can perform just as brilliantly as Windows-operated systems can. And although Macs are usually more expensive, they’re well known for their own outstanding features, such as being less prone to crashes.

Not to be confused with storage drives, a computer’s Random Access Memory (RAM) is only used to run open applications. It is responsible for keeping your computer performing at optimum speeds, especially when you’re working with several applications or programs at once. For small businesses, a 1200-2600-MHz RAM should suffice. The higher the MHz of your RAM, the higher its performance will be. To keep your basic programs running, 4-8 gigabytes of RAM is often satisfactory.

Ready to Buy a New Computer?

Deciding which computer to buy is an important business decision. While there are a handful of factors to consider, what you aim to accomplish in your business’s day-to-day operations should be your main consideration when choosing a computer. Businesses that require plenty of remote and mobile work should consider laptops. Those that require regular transfers of large datasets could benefit from the increased storage capacity associated with desktops.

Do you need expert advice in choosing the best computers for your small business? We’re happy to guide you in every step of your purchase decision. Give us a call today.